Here is the full scene, with a bit more work on refining Catwoman. She still has sketchy head, arms and feet, I’ll fix that next.

First half of the full turn

second half
And I’ll then resume Batman’s modeling, who got left at his blocking stage for a very long time, can’t wait to fix the numerous anatomy issues which are burning my eyes now.

– I tried shaping a cape as a test with a wire, I’m pretty happy with the direction it’s going. It gives enough room to see clearly the characters and it still has a bit of dynamism. I’ll probably try other shapes though in the meantime.

– I’ve been hesitating which style and costumes going for the characters now that I’m entering polishing soon, and I’ve finally decided to go for Jim Lee’s version. I might change a little some proportions in the process to fit better.

– Finally I’m still wondering if I should go for an abstract background (just a rock under Catwoman) or depict more of a precise scene. Still thinking.

Man, I’m enjoying this a lot, can’t stop working on it.

Here is the lady who will be “dancing” with Batman. First her skeleton, and then the first pass of modeling.

I find it more appealing and we get to see better the character’s face. Plus I like the challenge of having her too being off-balance, on one arm only this time. Hope I won’t pay this later on if it crumbles…

I wanted to make the left arm detachable originally but I went too far in the cutting process (though I left lot of safety length for this at first), so I had to repair it and I gave up on making a socket joint eventually. I still have to progress on this 😛

Finally I’ve put her on a separate temporary stand, to be able to make a quick first rough pass. I’ll include both characters in the same scene later on.

I’m pretty excited to see how all this will evolve 🙂

So here is the latest state of the character (plus an intermediate stage showing the skeleton update):

I’ve cut the arms and head armature to add a socket joint, allowing me to remove these parts and work them independently. Lot of problem solving, I loved it 🙂

I also tweaked a bit more the pose to get the imbalance feel I wanted. I’m happy that the weight of the sculpture isn’t deforming the armature, it stands pretty well for now. I’ll have to watch this along the way.

Finally added some more details to it, not too many though as I’ll probably add Catwoman in the picture now and get the full feel of the scene before more polishing. And the cape will be a big issue to solve, several possible options, need to think more about this.

I need also to get one of these lamp magnifiers to work on details later on, I’m killing my eyes when trying to work from real close. By the way if anyone knows where to buy one of these in Singapore, I’m interested.

I’ve been thinking for a long time giving a try at Sculpey figurines.

I decided last week I had procrastinated for too long, time for action. 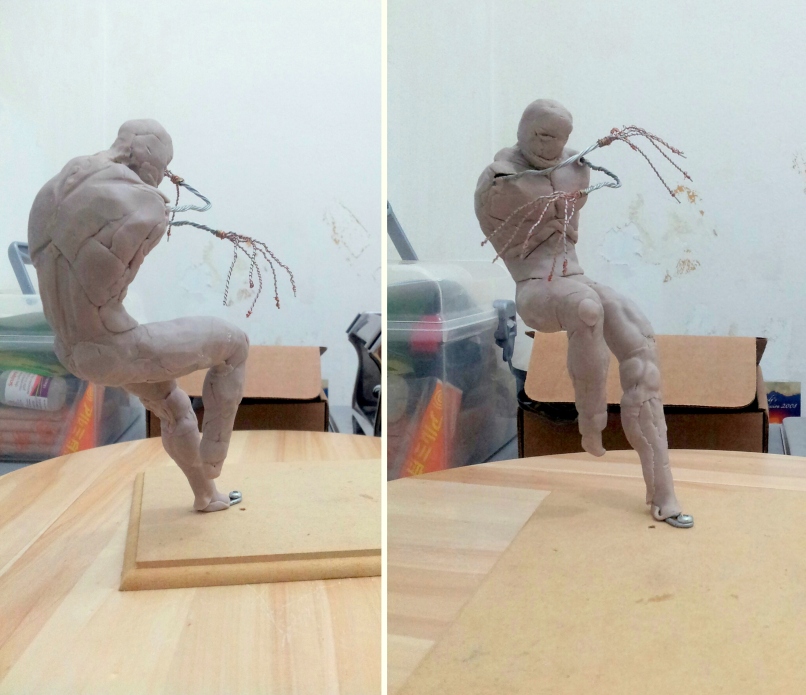 So here is my first attempt.

Decided to go for a fight scene, with Batman being kicked out of a roof by Catwoman. I want it to be alive and caught in action, with off balance and power. I drew a scene from imagination, we’ll see if I manage to pull that off.

After a few hours of work on getting the armature right for the pose I want, my Batman character looks like this.